Why Marriage? An Ongoing Conversation 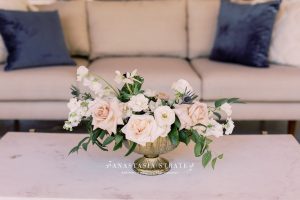 Last week I publicly posed a question that I often privately ask my clients in the context of writing their marriage ceremonies.

Why are you marrying?

And much like the answers we’ve received from clients over the years, the responses to our blog post varied. However, we did have a particular cluster of responses around the legal privilege of marrying. And in every case, these responses came from our LGBTQ+ couples and colleagues.

Our LGBTQ+ couples were quick to point out that they celebrate not the why of marriage so much as the very right to marriage.  And the right to marry precludes the question of “why,” doesn’t it?

Such an observation calls out privilege (the writer’s included). Some of us who have never been denied the right to marry should remember that this is, indeed, a privilege granted by the State. A right that many of us have taken for granted; a privilege assumed by quite a few of us. It is also a right and privilege that many deserving couples longed for and never received, or have only received belatedly because they were same-sex couples. So, for that failure to recognize our/my privilege, we/I confess and repent.*

Now, what is implied here is interesting: Marriage is a civil union. That its role in civil society has gravity. It matters. Think about this for a minute. The suggestion is that marriage is both a civil and a religious or spiritual matter. That is why even when certain religious institutions recognized and performed LGBTQ+ weddings and unions, it was not enough. The struggle for marriage equality and recognition did not stop at the walls of religious buildings. Hardly. The struggle reached into society. Into the State. After all, there is something about marriage that brings order to the common life, community, and society. Perhaps a building block, or a microcosm of the larger social network. A (but not “the”) foundation piece of community.

A moment to pause here because there is a fascinating quirk worth mentioning. What we are suggesting is that this modern Western marriage institution has long been the province of the State — an institution that straddles the religious and the civil. Given our Western European roots, it makes sense. For over a thousand years, the Church and State were one. However, modern marriage in Europe belongs solely to the State. Couples go to the City Hall to marry, and might have a religious wedding later. But the actual right to grant marriage belongs to the State alone. A civil ceremony is required. A religious ceremony is superfluous.

And yet here, in the United States where we love to tout separation of church and state, a religious ceremony is a state ceremony. Here in the U.S., the signature of clergy on a marriage license carries the same weight as the signature of the judiciary. Quirky? Yes. Confusing? Yes.

And caught up in that confusion is, again, a deep desire that our intimate relationships – all of them – be part of the collective relationship. Why is that? Well, because the State is our collective voice. Certainly not our only voice, not the voice of marginalized communities, but one of our loudest to be sure. (Thus, a reason that the argument around keeping politics and religion separate may be moot. They are ever-entangled.) And if we believe that we are stronger together, better together – both as couples and as a society – then every voice matters. Every voice makes us stronger, better, more than we ever were apart. 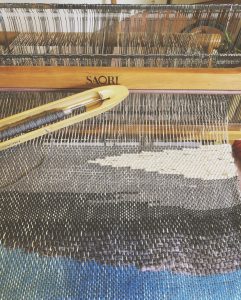 Our friend, Lauren Oland, is a weaver. Here, on her loom, the warp and weft required to hold her work together as one are visible.

So, what is the point? Well, back to the question of why – why marriage? Why do we marry and why do we choose marriage? Because the voice of the married, the couple, the committed intimate relationship strengthens society. The binding of two strengthens the binding of the whole. The warp and the weft work together in a tapestry. Denying one, no matter its texture, color, weight, or weave, unravels the whole.

Liz continues our conversation around “Why Marriage,” next week. And we continue to welcome your thoughts and ideas. Want to guest blog this topic? Join us – you won’t be the only one wishing to chime in.

*Since our inception in 1997, Central Ceremonies has happily officiated LGBTQ+ unions. That’s right . . . long before it was legally recognized. It has been and always will be our stance that love is love. Our interpretation of the institution of marriage has everything to do with intimate relationship, little to do with gender or sexuality. We are Seminary trained theologians, and our interpretation is grounded in rigorous study and dialogue around scripture, context, literature, culture, as well as rooted in the ongoing story of God and Humanity. Perhaps you do not agree. Well, we agree to disagree. Welcome to theological debate. Thanks for attending our tiny TED talk.