The Tale of the Wayward Marriage License. Part 2

Chapter 3: Where did the marriage license go? Or a brief history of quantum physics

We act like quantum physics and alternate universes are some radical new discovery when in fact, we’ve known about their existence for quite some time.

I mean, where do socks go? This is a question for all time. Or utensils? Why did I have a set of 12 spoons, but now only 7 of them reside with me? Did they not like the soup I was serving and made a great escape?  And my keys and favorite Sharpie also have a habit of slipping in and out of the fault lines of existence nestled in my purse.

Clearly dryers, dishwashers, purses, and mailboxes are port keys and portals to grand adventures somewhere else. Quantum physics is no radical discovery, y’all. It’s a weekly event for most of us. And just like some socks, some spoons, and a few Sharpies enjoy adventures into other universes, so, too, a select group of marriage licenses.

As a recap, Sara and Case had an epic wedding in Austin, and set out for their honeymoon and the next chapter in their amazing love story. While they were sipping cocktails and warming themselves on sunny shores, the rest of us got back to real life. Which for me means putting signed marriage licenses in the mail, custom crafting ceremonies, marrying other epic couples, and writing blogs. (I have the best job, really – insert my shameless plug here)

OK, but enough . . . you want to know about that license, right?

Chapter 4: Beyond the wedding day

In theory, upon arriving at the Clerk’s office, our license lands in a pile of fellow licenses where they all discuss their couple, the good time they had at the wedding and reception, in what color of pen they were signed, awaiting certification by the Clerk.

A license has about a four to six week retreat at the Clerk’s office. Then, it’s thrown back into the postal system where it arrives at the couples home about the time they’ve forgotten they even had a license to marry. Got it? Good! Easy. Done.

Meanwhile, Sara and Case honeymoon, and return to Austin in time for Thanksgiving, Christmas, and New Year’s Eve. In Sara’s own words, “What a time to be alive!” First comes love, then comes marriage, and then comes . . . changing one’s last name.

Chapter 5: The Wayward, Wandering, and What’s in a Name?

I tell my couples when the time comes to change their name, give me a buzz.  I will walk them through the basics of changing your name. It’s not difficult, really. But it does require the certified marriage license.  Sara, remembering my words, emailed me mid-January. It went something like this, “I am beginning the treacherous journey to change my last name and have realized that we have not received our marriage license! Is this something that will eventually be mailed to us by the clerks office, or do we pick it up? ”

Uh-oh.  The four to six week retreat for said license has long since past. At which point we must ask, “Where is this license?” As you can gather, the license can go astray two times:  once on its journey to the Clerk, and the other time, on the journey from the Clerk to the couple. Well, it seems after a phone call that our little license thought itself too good for a retreat at the Clerk’s office. It’s eloped with the socks and spoons, apparently.

I’d love to pause here and ponder – where do licenses go? Is it in the mountains skiing? Or on the coast sunning? Is it in someone’s mailbox quite confused about its locale. Did our license take a hike to Europe?  Or a quantum jump to a galaxy far, far away? We can only wonder, but in the meantime . . . are Sara and Case actually married?

Oh my stars! Sara and Case! Now, before you become unglued, yes, yes . . .  they are married.  And the Travis County Clerk and her office happen to be some of the most capable people around. So, they issue a new license for us, and I make plans to meet Sara down at the Clerk’s office to re-sign a newly created license.

In the meantime, breaking news:  Case’s car registration has also decided to warp time, and is now expired. So, Case must meet me down at the Clerk’s office to not only get married, but register his car.  What at time to be alive.

But hey, we did it y’all! We made it happen. Voila! 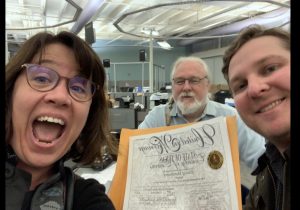 Oh hey! It’s a new license, curated by Case, (re)signed by me, and about to be handed directly back to a Clerk for certification.

And now, they should live happily ever after, right? Oh come on, did you think I would dedicate three blogs to this license if the story were over?