The Tale of the Wayward Marriage License. Part I

Back cover synopsis:  Sara and Case were the best kind of couple. Living their perfect life in Austin, Texas, they were beautiful, kind, intelligent, fun, and in love. They’ve planned the perfect wedding. The marriage license is signed, sealed, and  . . .

Preface: Let’s talk some quick logistics. The marriage license is the story of red tape and bureaucracy, paper trails, and the postal service.

But, the marriage license is also the story of falling in love, wedding plans, lush flowers and pretty dresses, crafting beautiful and meaningful words (shout us to us!), friends, family, feasting, and name changes.

Two people meet. They talk, go out some, go out some more, fall in love, decide love is a big deal, and decide to seal it. This sets off a process of planning and to do lists that shames Santa’s naughty and nice lists. Way down the list of so many things to do is the boring ole task of getting a marriage license. There isn’t much glamorous about getting your license, to be honest. Actually, there’s not much to it at all. It’s just one of those things you have to do. So, Sara and Case, a love story for the books, did just that. 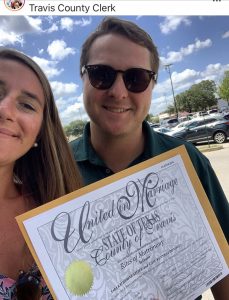 Getting your marriage license makes it real. Everything up until this point is ethereal. Signing contracts for visionary coordinators, bouquets to be made, cocktails to be served, music to be played. Even just the idea of “being married” is rather ethereal.

But once you have that piece of paper in your hands? For real, y’all! On that piece of paper are your two, full, real, live names. And emblazoned across the top: United in Marriage.  Whoa! This * is gettin’ real! So, boring as it is, gah! It’s happening! I often tell my couples to make a date of it. Take a picture. Go toast yourselves over a coffee or lunch date before you go back to work. After all . . . You. Are. Getting. Married!

Sara and Case, having realized their love story was a forever story, decided to make it official in September, 2019. And oh, what a fête! Not a detail was left undone. They laughed and smiled through their entire ceremony. We did, too! They exchanged rings and vows, and of course, they kissed. Then there was a perfectly perfect party, thank you Bird Dog Wedding. Sigh. It was splendid.  Impeccable. Don’t believe me? Here ya go: 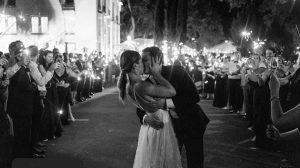 Time to wrap it up on my end. Sign, seal, and stamp that license! Hey, hey wait a minute Mr. Postman! As Central Ceremonies, we make it our job to handle the license after the wedding for our couples. It makes their lives easier, and we don’t worry that it didn’t get done. Gotta make this legal! So, I always snap a picture of the license and send it to the couple so they can flash it around for hotel upgrades, newlywed freebies, and first class seats on their honeymoon. 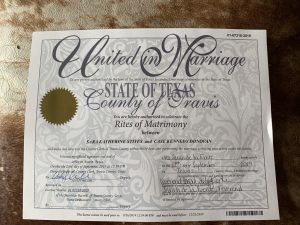 Well, look at that. It’s officially official. Or is it?

« The Driskill Wedding Showcase Dazzled
The Tale of the Wayward Marriage License. Part 2 »