Marriage is a Dragon 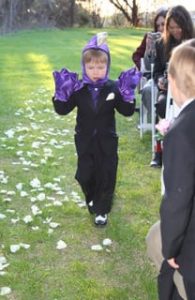 “We aren’t having a ring bearer. We are having a wedding dragon,” declared one of my favorite couples at our initial meeting. I remember meeting this couple for the first time. They squeezed me in over a one hour lunch during their busiest season of the year: Halloween. Before meeting them, I was not even sure who I was meeting. Their names were gender neutral, and the work site was in the hippest part of town. My first thought as I saw them walking towards me: they are way too cool for me. No way I’m getting this job.

But, our meeting went really well: they were delightful, creative, kind. And that wedding dragon? Well, the son of a friend who’d been asked to bear the rings declared he’d do it – but only as a dragon.

Now, dragons are quite the creatures. They’re wrapped in mystery, myth, fire, magic, power. Dragons defy all labels, shapes, colors, and sizes. They cross cultures, weaving their way into every society’s mythology. Dragons exist as something separate and set apart. Chasing dragons is desirable and admirable. We celebrate those who’ve tamed dragons. We sing of dragons, write poems of dragons, paint dragons, dress as dragons, dream about dragons. I mean, who wouldn’t want to be a dragon in life, much less a wedding? 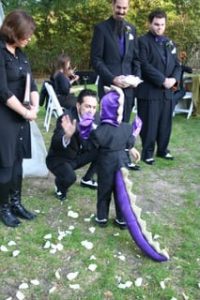 And marriage? Well it’s a dragon, is it not? We come to marriage full of fire! As Bishop Curry declared at this summer’s royal wedding, that fire of love is powerful stuff. But no matter what we read, what we hear, what we witness, marriage is a mystery. For each couple, it’s the undertaking of an epic journey. And each journey is unique, weaving together cultures, stories, families, histories, as well as individual people each with their own likes and dislikes.

I am often asked if I can tell whether a couple will “make it” or not. First of all, I am not even sure what “making it” means. But to answer the question: no, I cannot. How can anyone predict such a thing when we’ve no idea what adventures await a couple?   We’ve no idea when we head out into marriage what life will throw at us. The journey of marriage is its own beautiful task and undertaking. Some, it seems, have smooth seas and easy trails. They get Puff the Magic Dragon. But I’ve watched other couples encounter storm after storm on rough seas, and uphill marriage all the way. They clearly drew the Hungarian Horntail Dragon. There is not one way to chase it, tame it, slay it. That ring bearer was smarter than he realized! Marriage is, indeed, a dragon.

« Telling the Story of Marriage
Magic »