Konking and the Secret Language of Marriage

“In token of my love and devotion/I place this ring on your finger/I konk you.” 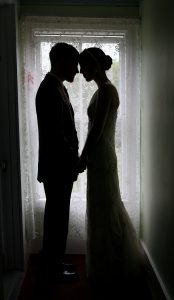 I choked on the water in my mouth. The beautiful customized vows my younger sister and her now-husband had written had been going so well. And then . . . “I konk you.” Say what?

Customizing vows is not an uncommon thing. In fact, I assist in customizing vows or guide personal statements for couples more often than not. It’s a fantastic way to truly articulate what “for better/for worse ” looks like and sounds like for a couple. Some of my couples insert humor. Other couples insert deeply meaningful references. And some send me cryptic lines . . . like my sister. In all my years, I must admit – it was my own sister who’d left me speechless.

I believe every couple has their own language. And a couple’s language definitely develops over years of their relationship. It’s the funny turn of phrase which references a private joke. Or an anecdote that belies a level of comfort and intimacy. Or a coded way to say something to the other. For my sister and her husband, “I konk you” was just that – a code. But as it sat in the first draft of their wedding ceremony text, it did not translate.

I emailed my sister: “You cannot say that in a wedding!” She replied, “Oh, but we have to, Sarah. It’s non-negotiable.” She began to unpack “konking” for me. You see, my sister and brother-in-law aren’t prone to public displays of affection, so touching their foreheads was their way of connecting in public spaces. It was a way to connect deeply without overt affection — an action they came to dub “konking.” Once explained, I found it deeply touching and beautiful. Of course they should incorporate it in their wedding. After all, they even engraved the phrase into their wedding bands. But while marriage has its deeply private and intimate spaces and secret languages, weddings are a public affair. This phrase, I explained, would require translation.

Let me repeat myself: Marriage has its deeply private and intimate spaces, but weddings are a public affair. This is to say that we do not live our marriages out solely in our own space. Our marriages live in communities; of friends, of families, of neighborhoods and cities. So, the marriage story is told not just by the two people in a marriage, but by the community. Marriage is not just a give and take between two people, a nurturing of their shared space, but also a nurture of the space they occupy within their broader world. Sometimes translation is required. Sometimes checks and balances are necessary. Marriage – not just the wedding – is a public affair even with its private spaces.

My sister, her husband, and I crafted an explanation of konking. Instead of making it a mere line in the vows, the first action they took after their consent and vows was to konk. That is to say, the first act of their marriage was this beautiful private language in a public space. And I deciphered.  I translated their konk for our community, and we, their lucky witnesses, were able to honor their space and language, as well as their love through our understanding.

So, I am curious: What is the private language you and your partner speak? And does your community know how to honor it?

P.S. The parents of three beautiful girls, konking now belongs not just to my sister and brother-in-law, but is a shared family ritual. The story of their marriage is now the story of their family.

Sarah has been crafting custom weddings for couples of all kinds since 1999. Sarah is a Ravenclaw, and loves historical fiction, hot tea, and cycling of all sorts. She is an ordained minister who believes in coloring outside the lines. Sarah has been married to her best friend, Joe, since 1994.  Together, their greatest treasures are their two children.

sign up to get the latest blog posts directly to your inbox!