Different ways to say “I love you”

Without ever explicitly saying “I love you,” several of my couples describe silly or sappy notes their partners leave for them expressing that sentiment. Photo credit: Weddings by Tony and Elena

Recently, a friend from Seminary posed a question on Facebook:

Without saying “I love you,” what are three words your partner says that mean the same thing?

I was fascinated by the question, and the responses. As I considered how I might answer the question, instead of three alternate words, I recalled two very distinct incidents, both years apart, where my husband’s love for me was laid bare. One I cannot share because it involves larger family systems, but the other? Well . . .

My entire life I’ve been told I looked like my Dad. I’ve been told enough times that I assume it is true. I don’t really know because I think our minds aren’t wired to see such things clearly. Or mine isn’t. But I absorbed the assessment enough to know that my hair is brown, my eyes are brown, my lips are full, my nose is pert, and my build is fuller. All things I share with my father. You know how it is . . . people tell you things about yourself in an almost benign way, and you absorb those things. It ranges from “You’re eyes are brown,” and “You’re good at swimming,” to “You’re the smart one,” and “Big things come in small packages.” Again, all phrases delivered as observations, but over time, become carved into our psyches in such a way that we (sometimes) end up limited by the very words meant to expand us, affirm us, or direct us.

It’s a startling moment when something (or someone) calls those words into question. One evening, far into my dating relationship with the man who would become my husband, he pulled back from kissing me to look at me. I watched him watching me. His eyes were sweeping over my eyes. He wasn’t looking into my eyes, but at my eyes. And I waited. (I know, it sounds like a Hallmark movie . . . what can I say?) What he said next? “Sarah, you have beautiful two-tone eyes.” 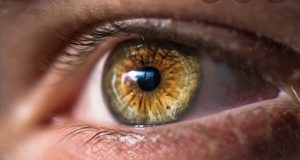 What? My eyes were brown. That’s what I’d been told my whole life. Brown. Like my father’s. But Joe insisted “Your eyes are not brown,” while gazing at me. And that evening he described, in detail, how my eyes were green with gold and brown in them. Rings of color spreading out from my iris. I went to a mirror and examined my eyes only to discover what he said was . . .  true. My eyes were not brown. They were, I suppose, hazel. And somewhere in that realization was a deeper realization: this man saw me. He noticed things about me. He made no assumptions, and pushed no agenda. Instead, he mapped me, and openly explored me. It sounds sexual, but it wasn’t. It was intimate. And those things are related, but also very different. But in that discovery of myself – through him – I felt seen. I felt noticed. And in that clarifying observation, he’d said “I love you.” At least that’s how it felt to me. He loved me.

I recently reposted the question on my Facebook page, and I will do it here, too . . . tell me how your partner says “I love you,” without uttering those words. The responses I’ve already received warm my heart, and give me life. And I will be sharing some of those with you over these next weeks, so stay tuned. Drop me a comment here, or email me if you feel compelled to share your answer. “I love you” happens so many beautiful ways. Let’s talk about it.