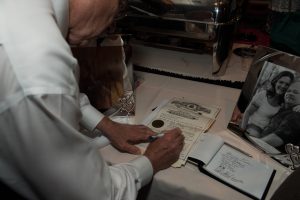 We’ve spent the past two weeks considering what marriage is  in an effort to answer the question “why do we marry.” We’ve done so by defining covenant and contract and then asking – which one is marriage?

There are certainly pieces of marriage that are contractual. Marriage is a negotiation between two parties requiring consent and capacity. There are legal implications involving the State. But we must concede that marriage is more than just a set of legal negotiations between two parties. As we’ve stated before, there is love. There is intimacy. There is freedom. And there is grace (to drop a critical word into the conversation). So, perhaps covenant is the better word. Covenant suggests and even encourages the deeper and broader nature of intimate relationship. But covenant has its own baggage. As we posted in last week’s blog, covenant implies an irrevocable, eternal agreement with the divine. Appropriating covenantal terms for human relationships, even expecting such things, can be problematic.

So, where does that leave us? If contract and covenant are descriptors, not definitions of marriage, we still are left to ask: What is marriage?

The truth is that marriage is a committed relationship between two people.

That’s it. Pretty simple. At its best marriage is an intimate relationship (note: intimacy does not always mean sex, people!) where the partners are safe being vulnerable with each other. At its best, grace is plentiful in marriage. At its best, mystery is allowed to exist; an acknowledgment that there are some things that cannot be known. And at its best, marriage is allowed to play out intimacy, vulnerability, grace, mystery, and partnership in countless and beautiful ways.

When we let go of the effort to nail it down or box it in and focus instead on the relationship alone, marriage is allowed to be many things. Actually, marriage is allowed to be anything. I often say at weddings that marriage is unique and universal. It’s true. There are millions and millions of marriages. That is to say there are millions and millions of committed relationships. And every single iteration of marriage is different than the next. After all, they are the product of two unique people coming together to create a third entity – a marriage.

So, with this understanding in mind, we turn back to the original task: Why do people marry? Come on back next week, and join us (as well as few other guest bloggers) as we wrap this series up (a series that we didn’t even know we were writing until we were writing!) pondering the elusive and mysterious “why.”

« What is Marriage? Contract or Covenant Part II
Take Love for Granted »