A Love Note to my Uncle on Mother’s Day 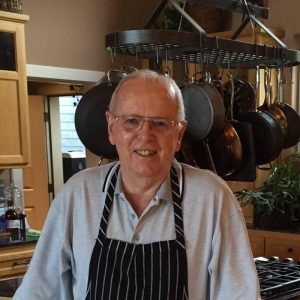 Uncle Tracy in the kitchen. He took up cooking as a hobby in his retirement.

When my Mom died suddenly in 2012, many other things died too. That is the nature of death. It is a compounding energy: death reveals other deaths, or (ironically) births other deaths, or plows up former deaths. In a tongue-in-cheek sort of way, death begets death.

Long before my mother’s death, I had developed a deep, meaningful kinship and love for my uncle (my Mom’s brother) and aunt, and my cousins. There was a time when I would have said this relationship was merely the result of proximity. In 1988, I’d arrived in Austin to attend my mother and uncle’s alma mater, The University of Texas. My aunt and uncle lived in and loved Austin. So, naturally, they were my parents-in-a-pinch. I house-sat for them, took care of their (awesome) dogs, shared UT sporting events with them, called on them if I was ill or had a question about a particular local need or issue. They were present in my life, but never intrusive.

Over time, they met my boyfriend who became my fiancé who became my husband. They were there for our wedding, when we had our first child, and again for our second child. Somewhere in the midst of sharing our lives, we began to spend summers together in Laguna Beach, California where my aunt had grown up. My cousins became like siblings to me, and my children grew up with “Matcy and Doc” as grandparent-type elders, and my cousin’s children became their cousins. Even now, our time in California is sacred space; an annual touchstone greatly anticipated, rich with memories, and something far deeper, and far more difficult to articulate.

It’s that “something far more difficult to articulate” that has become so glaringly obvious in these past months. For on February 20th this year, my uncle died. The chasm, the gaping space, the silence has been staggering. You see, as my cousin pointed out, he defied death so often that when he did finally yield, we found ourselves in a state of disbelief. Perhaps that is why I’ve struggled to speak about him, or his death. And yet, after silence there is the whisper of sound. After dark, there is light. After disbelief there is dawning recognition. 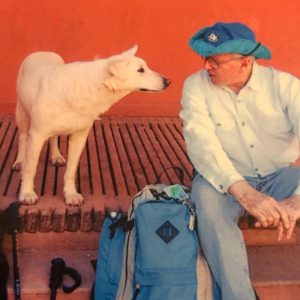 Any dog who got to hang out with Uncle Tracy was one lucky dog.

My uncle was an amazing man. He was truly many things: an accomplished and respected psychiatrist with a long, illustrious career, a pilot, a sailor, a photographer, a gardener, a vintage car collector, a traveler, a runner. He had a wry sense of humor, and could pull off some pretty awesome pranks. He was a son, a brother, a husband, father, grandfather, uncle, nephew, cousin. He was a native Texan but loved Washington State. He was an excellent listener, never the first to talk in a group conversation. When he did speak, we all listened. He loved his dogs something fierce. He was patient. Endlessly, faithfully, purposefully patient.

Only in hindsight have I seen this. As you can tell from the list, my uncle was a lifelong learner. And his gift to us? The greatest lesson I believe he learned, he taught us. And he taught us not just in life, but in his death: the love of family. For in his absence I see now my relationship was not proximity at all. The trips to California were not casually created. They were seeds he planted in each of us. Seeds that now have fully born fruit, as we find ourselves woven tightly together in the journey through grief. We are heirs of his great love of us, bound now to each other even as we are bound to him across time, space, and even death. “Whatever you do, stay in touch,” he would say. “Whatever you do, stay in touch,” he says now.

Uncle Tracy, I love you and I miss you. And most of all, I understand. We understand. Thank you. 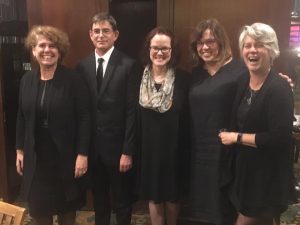 My beloved cousins and me.